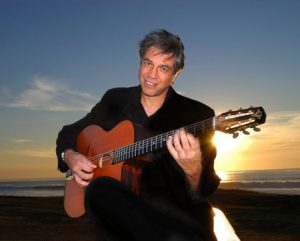 Born in the south of France, Patrick’s foray into the music world began at the age of 13 when he bought his first guitar. It was not long before he began playing bass and guitar semi-professionally while finishing high school. At 19 he landed a touring gig with an Italian pop band, Delta Landa with whom he traveled the world.  A few years later Patrick decided to follow his dream to study jazz in America. He enrolled in the Musician’s Institute where he honed his jazz guitar skills from the likes of Joe Diorio and Scott Henderson. Simultaneously he studied composition and arranging at the Dick Grove School of Music. After graduating with special mention from M.I.,  and with the encouragement  of his good friend Peter Sprague, Patrick moved to San Diego where he soon started to work steadily as a free lance professional musician. In 2007, Patrick created his latest Gypsy jazz group the ”Hot Club Combo”.